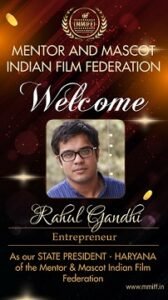 New Delhi: The Mentor & Mascot Indian Film Federation has appointed Rahul Gandhi, the Co-founder of Option Designs; as the State President of Haryana on 14th September 2021 with the vision to promote the Indian cinema, Indian heritage and Indian culture at an international level.

He is an embodiment of powerhouse who through his strategy has taken the company to new horizons of success, where he persistently disrupts the advertisement industry with the help of the impact he has created by going beyond the regular path.

On the occasion, Rahul Gandhi said, “Having passion for Indian cinema, it is a great honor to be a part of Mentor & Mascot Indian Film Federation. I would like to immensely contribute and join hands with the Federation in its endeavor to explore and enhance the Indian cinema landscape. By invoking the creative agency, I want to set a benchmark that values and celebrates the aesthetics of the Indian cinema.”

How pandemic changed personal finance and how you can save, invest and spend better?

TO THE NEW Recognized by Great Place to Work® as one of the Top 25 India’s Best Workplaces in IT & IT-BPM!

TVS Eurogrip premier an array of products at EICMA 2021