New Delhi, 25 Dec 2022: Dr Birbal Jha, who composed the Mithila anthem and a paag song, both copyrighted, was conferred the Kavi Kokil Vidyapati Award- 2022 in recognition and appreciation of his literary works, values and contribution to Indian society. This conferment of covetous honour to Dr Jha was held under the aegis of Vidyapati Mithila Maithil Manch, a social and cultural outfit here on Saturday. 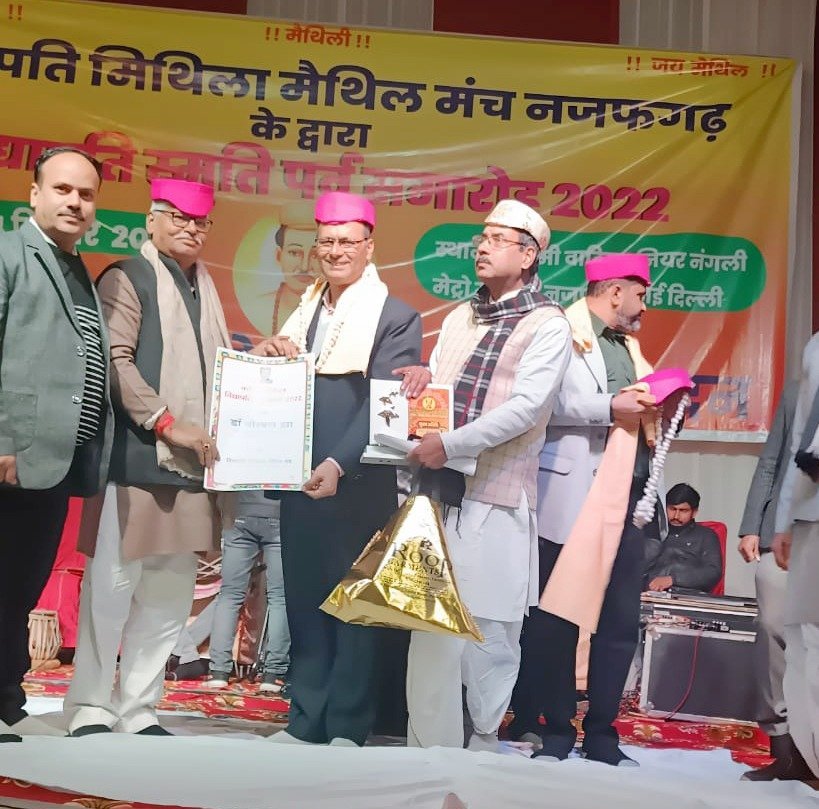 Notably, the noted self-help author and cultural connoisseur Dr Birbal Jha, born and brought up at Mithila, took to teaching English communication skills to the unprivileged and the downtrodden of Indian society under the banner of British Lingua way back in 1993, and also embarked on the project of protecting Indian culture, ethics and values and spreading them across the world though. His teaching, teachings, writing and writings have earned him a good name and fame, being scattered to the four winds. Such is well-established in the annals of historical events in the country.

“Language is just a medium of communication but culture is a way of life for absolute bliss. However, the English language has become more of a skill than a lingo, particularly in an Indian context. Hence, we need to master it as well under the Central Government’s three-language formula seeing that India is a multilingual society with 1652 languages and dialects ”, says the acclaimed linguist Dr Birbal Jha, who is popularly known as the youngest living legend of Mithila through a book published in 2017.

“Receiving the Vidyapati Award is shouldering more social responsibility for lateral thinking and literary development in the country”, added Dr Birbal Jha, who has recently been given the title of ‘Mithila Vibhuti’ for the year, 2022 by the International Council on Maithili.

On the one hand, Dr Birbal Jha is credited with having created a revolution in English training in India with the slogan ‘English for all’, and on the other hand, his Indian cultural movement trademarked and copyrighted ‘Save the paag campaign’ has made its special mark, leaving an indelible imprint on the psyche of the masses.

It is immortalizing for Dr Birbal Jha, who not only successfully revived the age-old Mithila paag culture and brought it into public discourse and fashion at the international level, but also ensured that paag as a word entered English dictionaries. His writings on the dissemination of Indian values and ethos are well-received, appreciated and sung as well.

His efforts and campaign for mass weddings through the revival of Saurath Sabha and for which a song, ‘Pritam Nene Chalu’ always echo in the hearts and minds of people of the Mithila belt.

Dr. A.V.S. Murthy has been appointed as the Chancellor of RV University