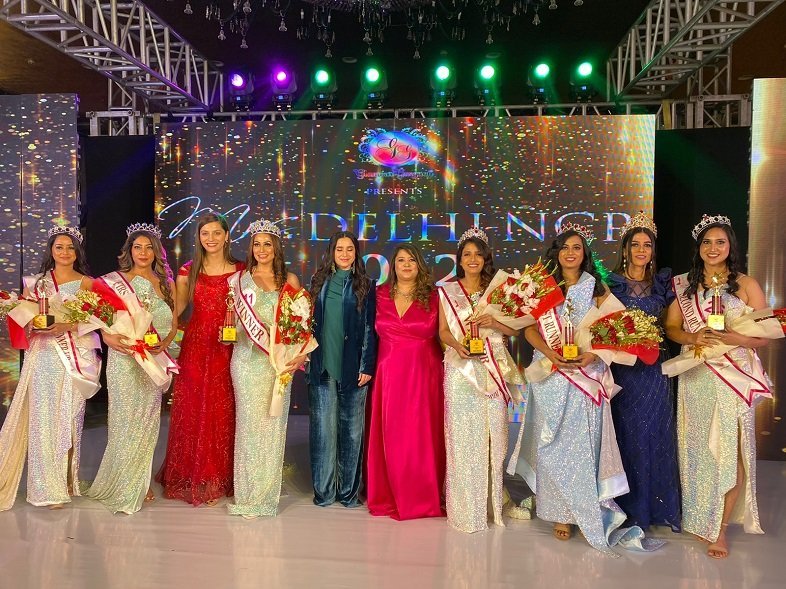 The stage was set, and 80 contestants walked the ramp to the music of choreographer and director Shie Lobo, to celebrate womanhood in all its glory during the finale of the sixth edition of the event. A total of 5200 women from the Delhi-NCR region had turned up for the auditions. Glamour Gurgaon Director Barkha Nangia said, “Delhi-NCR resident women up to the age of 45 years and height 5 feet and above were eligible to participate in the auditions. And this year’s theme for the pageant was breast cancer, which is an alarming issue among women today.”

Commending Barkha, Simone Singh said, “It’s an amazing platform that you are offering to the women who are often seen as done and dusted after being married. There was nothing that they can look forward to by way of finding joy in your personality, appearance, and your achievements, outside of just being married. But with this platform, you are not just giving them the ability to shine but also providing a safe space where they can learn and develop their skills. And all the participants that I met have the zeal to do better and present the best version of themselves.”

With each passing year, the event is witnessing an incredible reaction in terms of participation. “Despite all difficulties, these ladies have shown tremendous dedication to their goal. These finalists are the crème de la crème and as the organisers of Mrs. Delhi-NCR, we strive to foster confidence in them and enable them to be greater contributors to society,” Nangia shares.

2017 winner of Mrs. Delhi NCR Namrata Senani Garg has worked with companies such as LG, Apollo Pharmacy, and Ferns n Petals, among others. Talking about the pageant, Singh said, “I not only feel grateful to be a part of such an event but I am thrilled to see this dynamic and diverse group of intelligent women. This pageant is a great platform for them to shine.”

The finalists adorned metallic and sequin attires by Reewaz Couture by Shweta Jain. And in the running for the title, they underwent soft communication training, grooming sessions with famous fashion designers, image consultation, and in-depth training from December 15-18. “Apart from this, photo shoots and make-up sessions were held. Sessions were also organised to help them understand the value of their health. I believe all these things will groom them and aid them in getting work in the industry. But, of all, the most important thing is willpower and determination that they needed to work on,” adds Nangia.

This pageant honors the essence of modern women, said Nangia, adding, “Married women mostly have to think a lot before leaving the house. So, here the aim is to instill confidence in the contestants so that they can participate and showcase their skills to the world. This will assist them in personal development and discovering their individuality.”

It’s not necessary that all women participate just with the aim of working in the industry, sometimes the show ends up giving direction to women in their personal life as well. It’s a way to empower them personally as well as professionally.