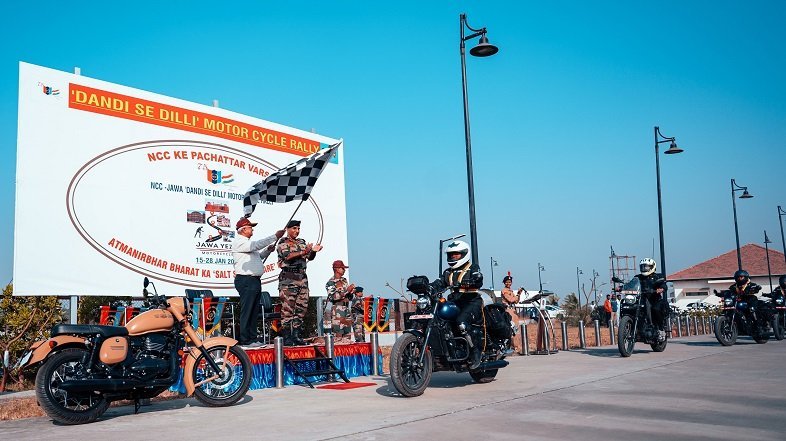 Bangalore, January  2023: Jawa-Yezdi Motorcycles is proud to partner with the National Cadet Corps (NCC) ‘Dandi see Dilli’ motorcycle rally. This motorcycle rally is an initiative by the NCC Directorate Gujarat as a part of its ‘Pachattar Varsh’ (75 years) Celebrations. The 1300 km rally was flagged off by Shri Kanubhai Mohanlal Desai – Minister of Finance, Energy and Petrochemicals, Gujarat in Dandi on 15 Jan 2023.

A team of 25 NCC cadets will carry a pot of salt made at the National Salt Satyagraha Memorial (NSSM), Dandi, and a CD containing a software program developed by Bhaskaracharya National Institute for Space Applications and Geo-informatics (BISAG) to symbolize India’s journey from the ‘extractors of salt’ to the ‘makers of software’. These tokens will be handed over to the Honourable Prime Minister of India Shri Narendra Modi during the Prime Minister’s NCC Day Rally to be held in Delhi on 28 Jan 2023.

To commemorate this occasion, Jawa-Yezdi Motorcycles has presented two Jawa motorcycles, one each in limited edition Khaki and one Grey to the NCC Directorate. The Jawa Khaki was introduced in the model’s line-up to honor the bravery and sacrifices of Armed Forces Personnel. Apart from these, an assortment of 25 Jawa-Yezdi Motorcycles will be ridden by the cadets throughout their journey.

The rally will see riders traverse cities like Vadodara, Ahmedabad, Gandhinagar, Udaipur, Ajmer, Jaipur, and Alwar before concluding the ride in New Delhi. Celebrations are planned across Jawa Yezdi dealerships across these cities where the riders will be taking pitstops and will be recognized for taking part in this rally.

This partnership falls under Jawa Yezdi Motorcycles’ #ForeverHeroes initiative, conceived to inculcate a sense of gratitude towards the Armed Forces. Right from its early phase, the company has been developing a culture of values to appreciate their efforts and sacrifice that helps keep the country safe, peaceful & prosperous. In 2019, the company formally announced this initiative to contribute to the cause of the welfare of Armed Forces personnel and their next of kin. The company, since then, has continued its support through contributions and support in rides marking historic and victorious milestones like Kargil Vijay Diwas, Swarnim Vijay Varsh, and 75 years of Independence.

In its day-to-day functioning, the company also looks forward to facilitating interactions with its employees & customers through its network and other suitable occasions with the armed forces personnel to help build regard & respect for their contribution to the country.