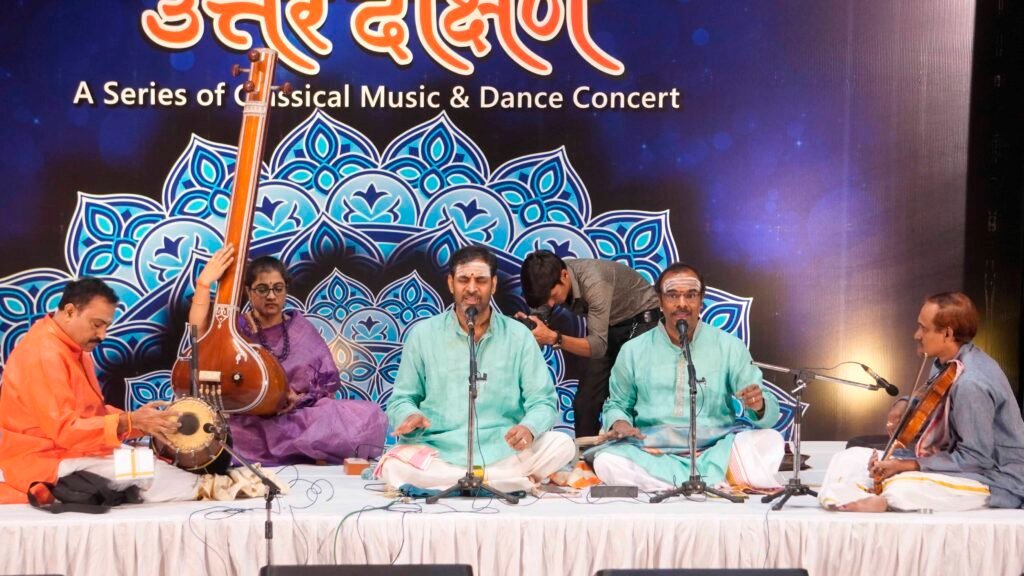 Hyderabad, January 10, 2023: UTTAR DAKSHIN the renowned Classical Jugalbandi series of Concerts held on Sunday till late at night at Bharathiya Vidyabhavan, King Koti, and enthralled 250 plus music lovers of Hyderabad.

It was a unique combination of the Flute by Pandit Pravin Godkhindi and Carnatic Vocals by Malladi Brothers Vidwan Shri. Ramprasad and Dr. Ravikumar are two prominent artists of international repute in their own genre.

Shri. Mohan Hemmadi, the man who is well known Indian classical music circle in the city. The 87 years old music enthusiast was honored with Anupam Lifetime Achievement Award for his amaranthine service to Indian Classical Music. From being the tour manager to Pandit Ravishankar ji to the most sought-after person for promoting classical music to Hyderabadis till date through his organization Surmandal, Mohan Ji has the same enthusiasm and Love for music at the Age of 87, said Mr. Narahari of Vivid Arts

I grew up in Hyderabad. I studied in Nrupathunga School said Pandit Pravin. He Bagan his performance with Raag Purva Kalyan. Later performed hamsadwni and Bhajans. The audience gave him a standing ovation for his extraordinary performance

Later Carnatic Vocal performance by Malladi Bros was held. Audience their performance too.

The Series was a celebration of kinds as these renowned artists of two different forms treated the audience with unique styles of their own.

VIVID ARTS in association with SURMANDAL, Hyderabad hosted the 12th Edition at Hyderabad. The program was powered by LIC of India and Co-Sponsored by Indian Oil.

Uttar Dakshin has had 11 magical years and has been one of the favourite concerts for Classical Music lovers contributing to the regional harmony between North and Southern India with the two forms of Music. The 12th edition of the concert was organized as a part of 6 cities tour at Mumbai, Delhi, Hyderabad, Bangalore, Ranchi, and Chennai