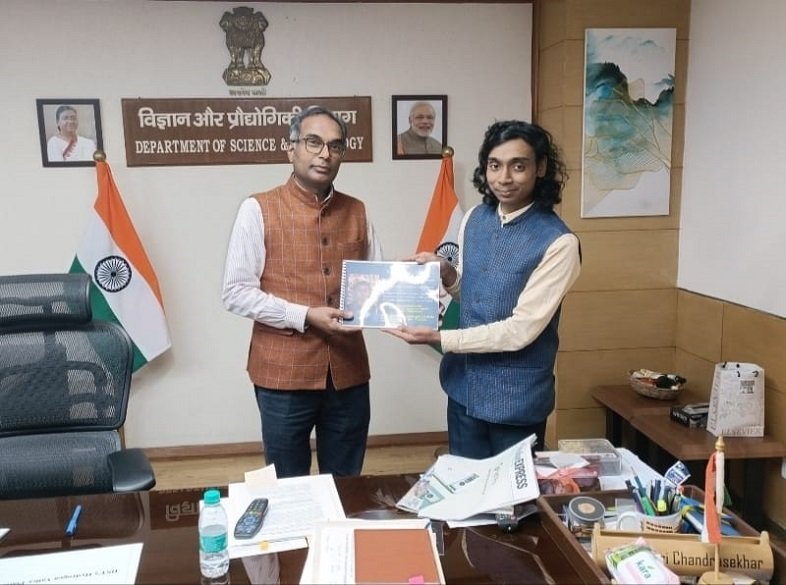 New Delhi, 20 January 2023:Two-time winner of the National award, Fit India ambassador and International artist Apoorv Om has been invited to speak at the India International Science Festival 2022. Department of Science & Technology (DST) Secretary Srivari Chandrasekhar extended the invitation to Om to present an innovative 2D/3D hanging model of IISF. The Fit India ambassador will be speaking at the Student Science village at MANIT, Bhopal. He will address students from across the country and explain the medium of communication digitally for self-dependency on “Leave No One Behind” as United Nations Sustainable Development Goals” in 75th Amrit Kaal of India and G20 presidency.

This is the fourth time he has been invited to speak on the subject. He was also honored with the Presidency pin of the United Nations General Assembly for his awareness of the 72nd President, different UNO conferences, and major dignitaries such as Late. Kofi Annan, International Court of Justice, worldwide.

Apoorv Om is a deaf and young Innovative artist and activist from New Delhi who advocates for the inclusion of the deaf into the mainstream. Honored as a Youth Activist for the UN Sustainable Development Goals and invited to the Second International Conference on Youth Volunteering & Dialogue at UNESCO’s Headquarters, Om was awarded India’s National Award for Empowerment of Persons with Disabilities (Divyangjan) by the President of India and Ministry of Social Justice and Empowerment, Department of Emp. of PwDs, Government of India, on the International Day of Persons with Disabilities in New Delhi on 3 December 2017. The President of the UN ECOSOC has also invited him to ECOSOC Youth Forum 2019 at the United Nations headquarters, in New York. Mr. Apoorv spoke on climate action for paper recycling initiatives at all levels.

Dr. A.V.S. Murthy has been appointed as the Chancellor of RV University