Hyderabad/ Mumbai – August 9, 2022: Union Bank of India along with India’s Fitness Icon Milind Soman today, flagged off the 2nd edition of ‘The Unity Run’ from the Bank’s headquarters in Mumbai. The event kickstarted with an unveiling of an official T-shirt and customary kick-off.

India’s fitness guru and legendary fitness icon Milind Soman are geared up to run solo for the 2nd edition of The Unity Run which will celebrate 75 years of India’s Independence. The Unity Run will start from Jhansi Fort, the mainstay of the first war of Independence, the 1857 revolt on 15th August 2022, and will end at another historical landmark Red Fort, Delhi on 22nd August 2022.

The 450 km long Unity Run will see a major stopover at Gwalior Fort, a strategic hotspot of the Maratha-Mughal war, and the seventh wonder of the world, the Taj Mahal at Agra.

Ultraman and barefoot runner, Milind Soman will be completing the distance of 450 km in 8 days. He will run across 5 states – Uttar Pradesh, Madhya Pradesh, Haryana, Rajasthan, and Delhi. Mr. Soman will be running through the historical landmarks and cities in these states like Jhansi Fort, Chitrakoot, Gwalior Fort, Vrindavan, Agra, and more. 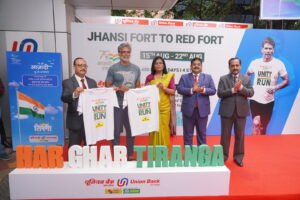 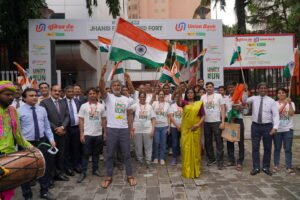 Speaking on the occasion, Ms. A Manimekhalai, MD&CEO, Union Bank of India, said, “We take great pride in associating with ‘The Unity Run’ and spread the message that our ‘first wealth is health. We believe that such ‘Unity Run’ helps inspire people to begin their fitness journey well in time and together fight against any looming health issues. At Union Bank of India, we continue to support such endeavors as we understand the role Sports play in building social bonds and community spirit.”

Forbes India felicitates the high-flyers in business, entrepreneurship & entertainment at its flagship event ‘Tycoons of Tomorrow 2022’

Forbes India felicitates the high-flyers in business, entrepreneurship & entertainment at its flagship event ‘Tycoons of Tomorrow 2022’