New Delhi: 09/09/2022: uKom co-founders Mr. Ritesh Khandelwal and Mr. Ankit Jaipuria recently attended the event, which took place in Paris from September 2 to September 5. The team was able to generate roughly 50+ leads at the event, and it hopes to interact with the many brands throughout Europe.

The European market has already covered the winters of this year, thus the market is now more interested in the summer of 2023. The uKom team will interact with other brands in the Italian regions during a meeting that has been scheduled and when they are in Italy from September 6 to September 10.

The modern-day Apparel supply chain company, uKom, makes it simple for emerging small firms to establish themselves as household names. They are fostering the expansion of the new fashion industry. As no one has a large budget to build a factory and prepare the clothing, they produce clothing for brands where there was a fashion gap. uKom has a manufacturing facility where they prepare orders for clients, who may then sell them under their names and trademarks. 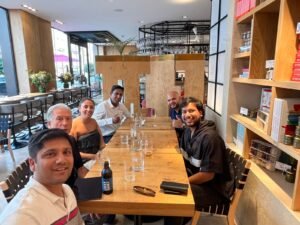 Realizing that fashion businesses’ previous sourcing practices were flawed served as the impetus for creating uKom. The clothing’s origins were inappropriate for the difficult times of the twenty-first century. It was difficult for businesses to undertake rigorous trials or to be inventive in situations where many stakeholders were traveling back and forth, with long lead times, and a high minimum order quantity.

uKom’s main source of inspiration was the accomplishment of several fast fashion retailers, such as Shein and Zara, which followed agile sourcing or quick turnaround with a cheap fee model. Particularly during the Covid recession, when well-known businesses like J.C. Penny and Messies struggled severely and saw numerous bankruptcies, this was true.

uKom offer three services:
● Provide lead times of 21 days even though the C2M model has made a one-day lead time firm.
● Offer a 50-piece amicus; they see us breaking it into just one piece.
● It also gives access to a huge selection of design possibilities, including a catalog from which ONE can select several different designs.

uKom provides an exclusive, hand-curated inventory that is supported by data designed within, much like Myntra, Flipkart, and other websites. These are the options available they will rapidly become bestsellers. uKom’s main objective is to make it easier to start a business in an environment that promotes a healthy lifestyle, reduces amoebic conditions, and provides hand-to-hand design to delivery services.

uKom arrives as an agent to completely alter what was previously accepted, and the uKom comes to rethink the entire sourcing process. uKom is a platform that allows anyone to simply launch their business. People can start things on this platform that were previously impossible. Many students attend NITs and NIFT, but because they lack manufacturing, they are unable to launch their brands. uKom makes business creation simple, so those looking to launch their brand can use this as a solution.