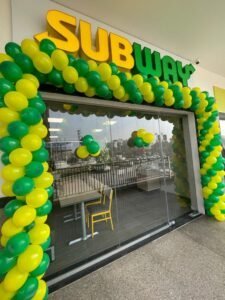 Commenting on the store’s opening, Prateek Mittal, Executive Director, of Sushma Group, said, “It is a historic day as Subway’s first COCO store opens at our European-themed high-street retail offering, Sushma Capital. It is a recent addition to the list of popular food and beverage chains like Costa Coffee, KFC, and Pizza Hut, which are functional at Sushma Capital.”
Spread across 6 acres, Sushma Capital has a space capacity for over 300 stores and is built on a low-rise European Galleria. The project has dedicated spaces for exclusive Fashion Retails, Offices, hypermarkets, Food Streets, Health & Wellness, Fine Dining, Entertainment Centres, and proper spaces for flea markets.

He continued, “We want to establish Sushma Capital as a modern-day hangout destination for everyone. High-street projects are in great demand in Punjab, especially in the fastest developing zones like Zirakpur. The local population has developed a refined taste for projects meeting international standards of efficacy and visuals. Sushma Capital has become the masses’ favorite.”
Sushma is a leading real estate developer in Punjab and has majorly developed luxury residences, holiday homes, and commercial establishment