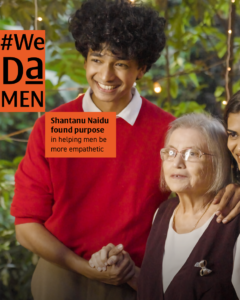 National, 13 January 2023: It’s common knowledge that January is the make-or-break month for health and fitness institutions. A global study says more than 90% of resolutions made are related to hitting the gym and eating healthy. Sadly about 50% of those sustain less than 90 days.

While picking up a gym membership is a good start to living a physically fit life, DaMENSCH hopes to inspire men to also think about their mental and emotional health. Through its new campaign #ComfortInAPurpose, DaMENSCH asks men a fundamental question for 2023 – “What’s Your Purpose?”

Men, as a gender, are seldom encouraged to portray their vulnerable emotions, especially care. Following the success of its Men’s Day Campaign, DaMENSCH is yet again breaking stereotypes through three inspiring stories of men, aged 19 to 40, who now join WeDaMEN – a community by DaMENSCH on a mission to make mankind comfortable.

The three men, who are a part of DaMENSCH’s “Comfort in a Purpose” are headlined by Shantanu Naidu, the man who created waves by becoming the millennial friend and assistant to Mr. Ratan Tata, His purpose is to care and protect those who are struggling in life has helped him overcome any and every roadblock. After starting an initiative to protect the stray animals on streets through neon-collar tags, he started his own initiative called GoodFellows to take care of grandparents and bridge the “intergenerational gap”. He’s found purpose in encouraging more men to come forward and be empathetic towards the elderly.

Aman Sharma, a 19-year-old man who struggled with climate anxiety after growing up in Delhi, realizes that he was not the only one facing this. He began gardening, and bird-watching to feel one with nature, which later became his solace. Today he’s found purpose in pursuing climate activism to raise awareness among his generation to do better for nature.

Chow Sureng, a man who was battling social anxiety and emotional trauma, found comfort in being a guardian to a rescued stray dog. Today, he is inspiring travel communities to be pet-friendly. He believes that more people can grow emotionally stronger and more confident simply by living for a voiceless creature that loves them back unconditionally. Providing for his dog Bella, and exploring new places with her on his bike, is his purpose.

DaMENSCH since its inception has always been a community-first brand driven by consciousness. DaMENSCH is known for creating ripples with its impact-led vision evident through its every step- be it through the eco-friendly production processes of its apparel, inclusive and fair policies, or purpose-driven campaigns that advocate for men and their rights. Beyond building a brand, DaMENSCH is bringing in a transformation, which is why it is chosen by leaders of today to accelerate the mutual mission of treading with purpose.

The campaign is kindling the inner drive among everyone to take out time to find his or her purpose, lead with ambition and make a difference in their own lives.

Commenting on the campaign, Deepti Karthik, Senior Vice President, Marketing, at DaMENSCH, said, “Once we knew our Brand Truth(Comfort) we set out to define our role in our consumers’ lives. We identified our archetype as Creator with our core DNA being “Innovation” which naturally aligns us with those who don’t walk the trodden path.

As a brand, we want to be that person our customers are the most comfortable with, someone with whom one has meaningful discussions. We don’t think of ourselves as mentors or guides Nah.. more like that chill friend who one feels like talking to when you need to declutter your head and a personification of this Brand Role is our community -WeDaMen.

WeDaMen is a community for men who subscribe to alternative masculinity, it stands for what we as a brand believe in, and what a privilege it is to welcome Shantanu, Chow, and Aman to it”

Beams fintech, helps create 2 soonicorns in the startup ecosystem of India, with a combined valuation of $1 billion

Beams fintech, helps create 2 soonicorns in the startup ecosystem of India, with a combined valuation of $1 billion