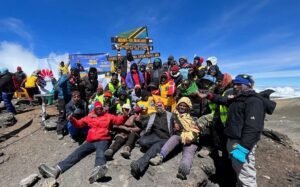 Kilimanjaro, Tanzania, December 22, 2022: On 13th December, for the first time, high-speed internet coverage was provided on Uhuru Peak, at the top of Africa’s highest mountain at 5,985 metres above sea level, as well as rest huts along the way, including Horombo and Kibo.

From now on, visitors will be able to share updates via the internet as they ascend to the summit. Most importantly, if there is an emergency, visitors will also be able to call for help. Earlier in the year, all rest camps below 3,795m on Kilimanjaro were connected to high-speed internet and Wi-Fi coverage.

Kilimanjaro is Africa’s highest mountain and a UNESCO World Heritage Site that attracts around 50,000 climbers per year. Tourism is vital to the Tanzanian economy and has generated around US$1.4 billion in 2021, accounting for 6% of Tanzania’s GDP.

Tanzania’s Minister for Information, Communications and Information Technology, Nape Moses Nnauye, praised Huawei’s contribution in deploying network coverage on Mount Kilimanjaro, which will not only help to attract more tourists to Tanzania allowing them to share and promote Tanzania’s rich tourism resources to the world in a timely manner but will also improve employment, increase incomes and promote national development. “The connection of Africa’s highest peak brings hope and strength to the people of Tanzania, and makes Tanzanians proud of their country once again.”

Venus Muro, Chairman of the Board of TTCL, said, “The unveiling of the network and establishment of internet signal from the foot of Mount Kilimanjaro to the top reminds me of the words of Julius Nyerere, father of Tanzanian nation. He said, ‘We light the torch to bring hope to the people.’ Today, by providing connectivity, we are opening the door to the world to talk about Kilimanjaro and bring the world’s attention to Tanzania.”

TTCL’s Director General, Eng. Peter Ulanga said, “We worked closely with Huawei during the construction of the network to connect Africa’s highest peak. Huawei has provided us with high quality equipment that worked smoothly despite extreme weather conditions.”

Damon Zhang, CEO of Huawei Tanzania, said that since entering Tanzania in 2007, Huawei has been committed to providing reliable and secure telecommunications to the Tanzanian people. “Huawei’s support for the construction of the network and internet coverage on Mount Kilimanjaro is a manifestation of Huawei’s support for the implementation of Tanzania’s National Information and Communications Technology Policy. In the future, Huawei is willing to continue to be part of Tanzania’s success story and will help the country to achieve its Third National Five-Year Development Plan (FYDP III) by actively participating in projects such as Tanzania’s ICT broadband backbone network and Rural Coverage Project.”