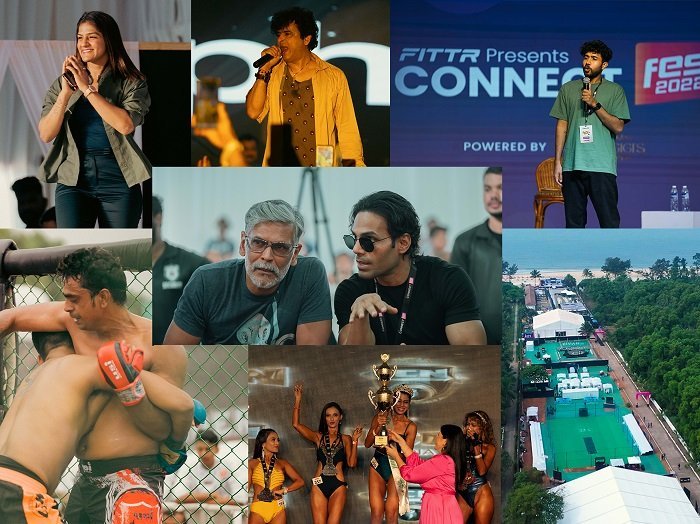 The mega gala brought together fitness enthusiasts from across the country and witnessed enthusiastic participation in all its fitness and sporting events like MMA, Box Cricket, Arm Wrestling, Powerlifting, and the Garmin Step Challenge.

Athletes from around the country also participated in the mixed martial arts (MMA), powerlifting, and Garmin Step Challenge events organized at CONNECT. Guests also had an opportunity to showcase their passion for fitness in sporting events such as Box Cricket and Arm Wrestling. Prizes collectively worth lakhs of rupees awaited the participants with the highest endurance and strength.

No event is complete without delicious food, and Radisson Blu Cavelossim helped enhance the experience at CONNECT by hosting a tantalizing Food Zone for guests. The delicious culinary experience helped attendees take their taste buds on an unmatched adventure. But the showstoppers were none other than internationally famed celebrities Milind Soman, Ritu Phogat, Palash Sen, and the Euphoria band, Abhishek Upmanyu and Karunesh Talwar.

In a fireside chat with FITTR Founder & CEO Jitendra Chouksey (JC), Commonwealth Wrestling gold medalist Ritu Phogat spoke about her famed wrestling family, laid emphasis on how she began her own training at the age of eight, and just a few years later, how she dropped out of school to focus on her wrestling career. She stated how she has now moved to Singapore & has joined the world-renowned Evolve MMA, where she trains with multiple Muay Thai and Brazilian Jiu-Jitsu World Champions to bring her striking and submission skills on par with her elite wrestling talent. Her ultimate goals are to make her country proud with her performances at the global level and to become India’s first Mixed Martial Arts World Champion.

Milind Soman also shared his experiences with JC, talking about his own fitness journey and what it has taught him, his childhood years and how they set the foundation for his love for fitness, insights from his modelling and acting career, his Ironman journey, and what the future holds for him.

Palash Sen and his band Euphoria performed a high-energy feat at the fest, attracting unmatched energy and nostalgia from the crowd. They invited the audience to join in during their performance of timeless favorites such as “Maeri” and made the event an interactive, surreal activity. Indie electronic rock band Roohani and famed Pune hip-hop group StreetBeats also contributed to the music scene of the event with their spectacular performances.

Adding even more exhilaration to the fest, FITTR felicitated the winners of the 17th FITTR Transformation Challenge during the event. Acing the rigorous 12-week fitness challenge, Gaurav Jha and Neha Karmarkar emerged victorious in the male and female categories, respectively. As a celebration of their persistence, they were rewarded with cash prizes worth ₹3,00,000 each.

Commenting on the event, Jitendra Chouksey, the Founder and CEO of FITTR, said, “The CONNECT Fest was received well by the fitness community, and we are elated to see our family of fitness enthusiasts grow even bigger. At FITTR, we are continually committed to furthering our vision of creating a healthier India by coming up with innovative and fun ways in which people can pursue fitness. Furthermore, we are overwhelmed with the response we received for our 17th Transformation Challenge and really delighted to see the performance of the winners. We are positive that these challenges provide more people with the much-needed nudge towards transforming into their fittest selves.”