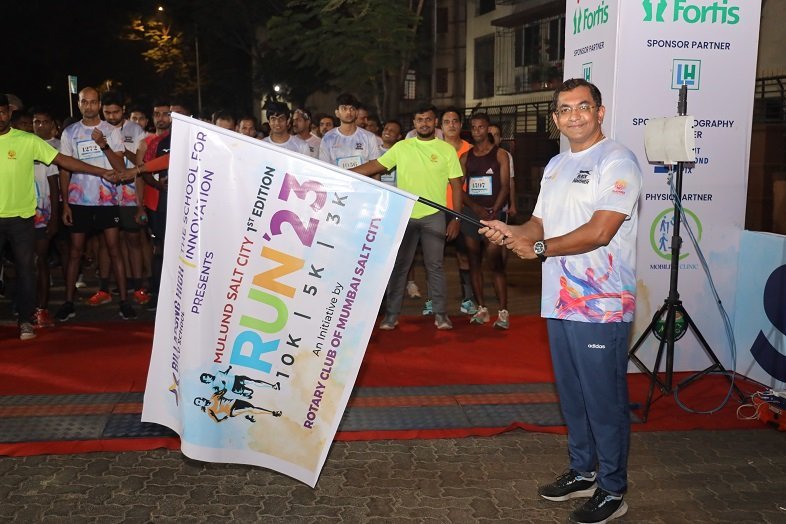 Mumbai: In an effort to support the cause to set up a dialysis center for the needy and to create awareness towards health and fitness, Billabong High World School-The School of Innovation, Mulund, joined hands with the Rotary Club of Mumbai Salt City to organise the first Marathon in Mulund on January 8, 2023. The proceeds from the run will be used for a noble cause to set up a dialysis care center in Mulund that will provide patients with treatment at subsidised rates.

Titled MULUND SALT CITY RUN’23, the run was flagged off by Mr. Prajodh Rajan, Group CEO, Lighthouse Learning, at 6 a.m on January 8, 2023, in the presence of the Rotary Club of Mumbai Salt City President Rotarian Pranav Pathak, Project Convenor CA Balan Narayanan, and Club Secretary Rinku Parasuraam. More than a thousand two hundred people, between the age group of 8 to 81 years, participated in the event.

Some of the eminent names and avid marathoners that joined the event included Lt Cdr Bijay Nayar, Satish Gujarat, Girish Bindra, and Saurabh Golam. There was a 3k, 5k, and 10k run.

Commenting on the success of the event, Mr. Rahul Deshpande, CEO, of K12 Schools, Lighthouse Learning, said, “The positive experiences that sports and an active lifestyle bring play an important role in a person’s life. As educators, we have always encouraged sports and fitness because a healthy body leads to a healthy mind. This event not just encourages fitness but will directly impact the lives of many seeking dialysis treatment in and around Mulund. We are proud to partner with the Rotary Club for an initiative that encourages healthy living and that also has a positive impact on society. We look forward to supporting such noble causes.”

Mr. Balan Narayanan, Convenor of the Rotary Club of Mumbai Salt City said, “We were delighted to see all the participants blazing up the streets of Mulund to support a noble cause. It is a moment of great pride for us to partner with an institution like Billabong High World School, a part of Lighthouse Learning Group, as it sends out a deep message to the future guardians of our country. We look forward to working closely with the team at Billabong High World School to launch more initiatives with a social impact in the future.”

Avid marathoner, Lt Cdr Bijay Nair, said, “I want to congratulate Billabong High World School for partnering with Rotary Club for such a noble cause. Since the pandemic began, the focus on fitness has increased tremendously. Such events provide a fillip to the importance of an active and healthy lifestyle.”